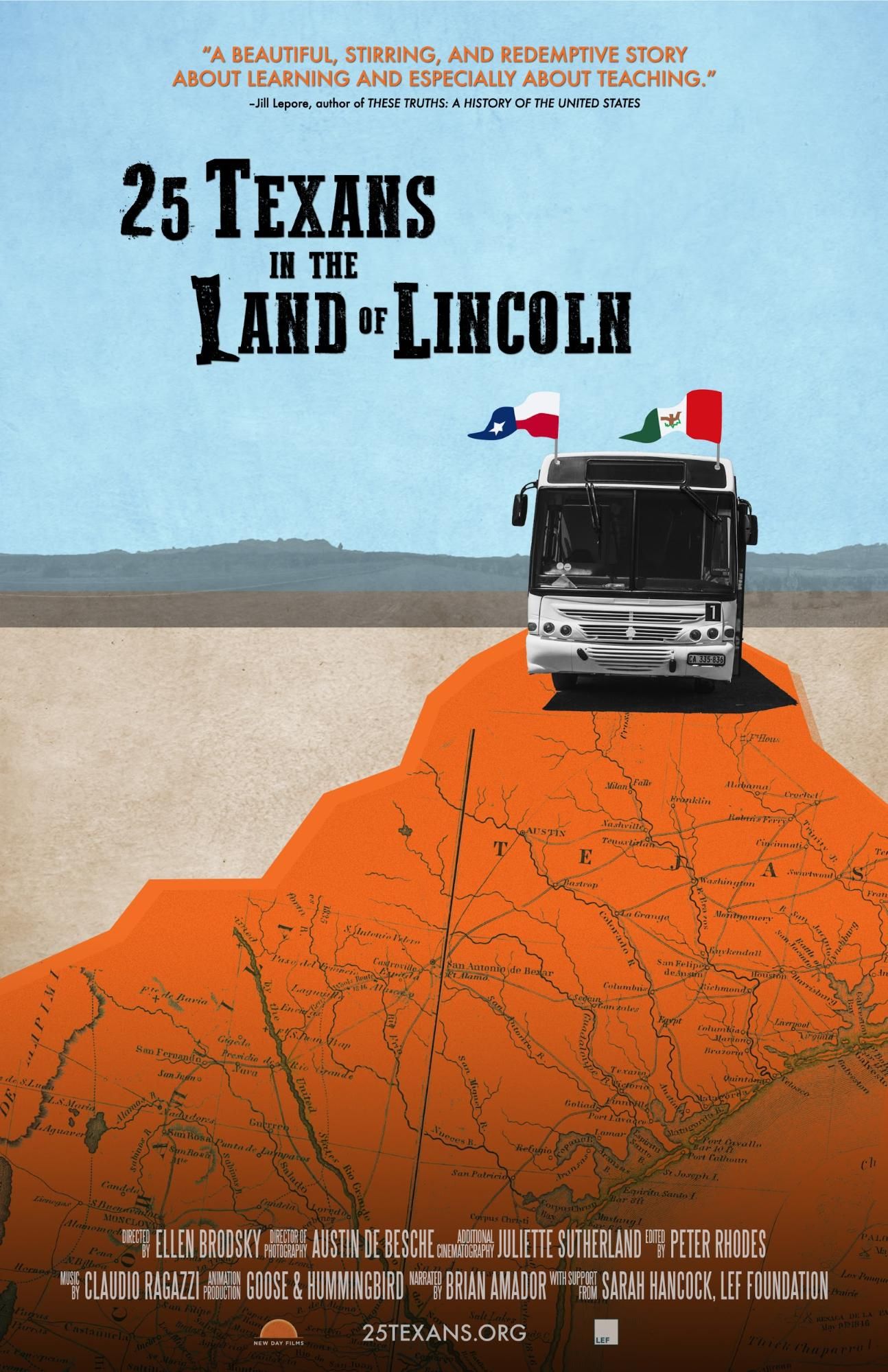 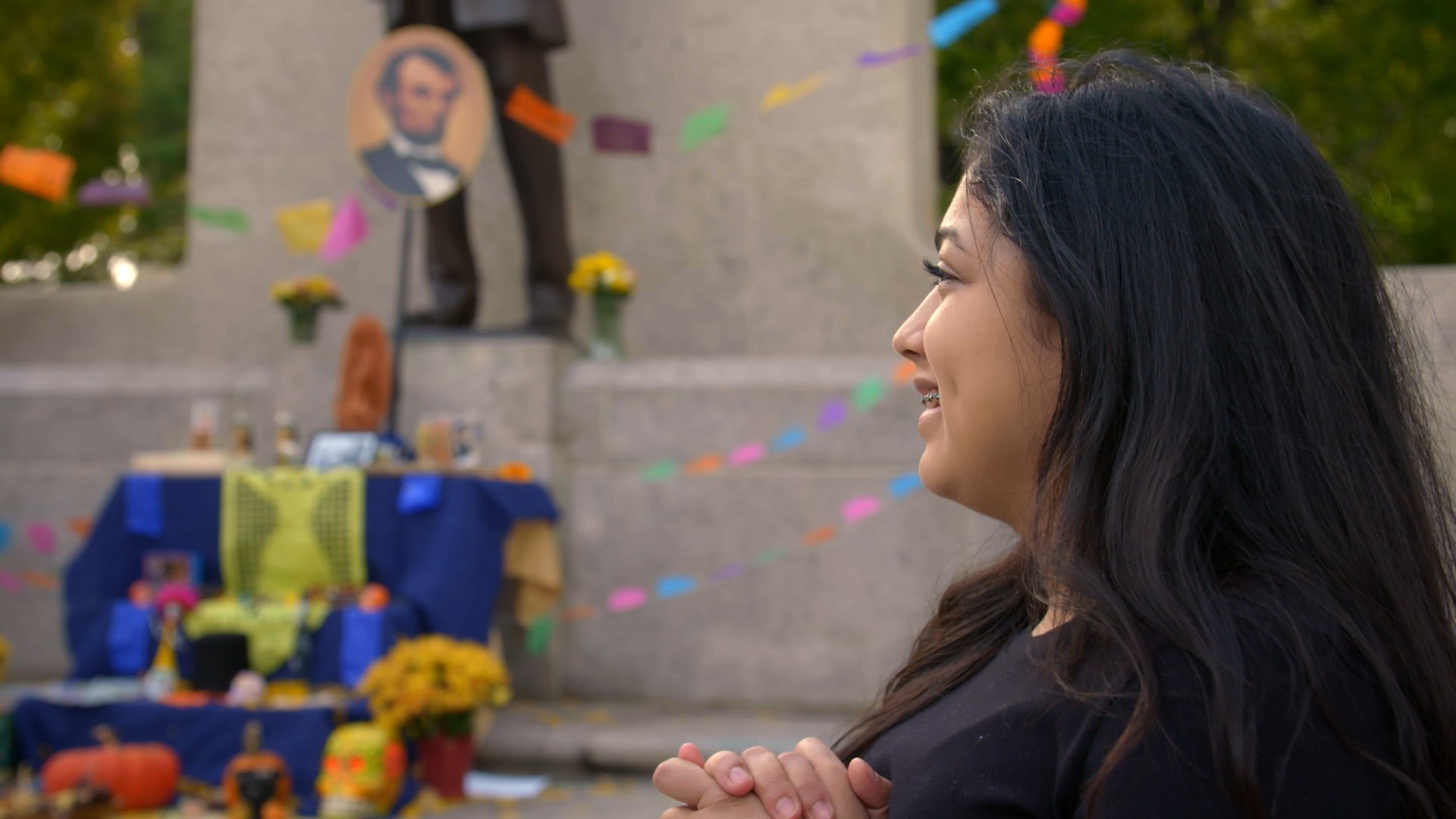 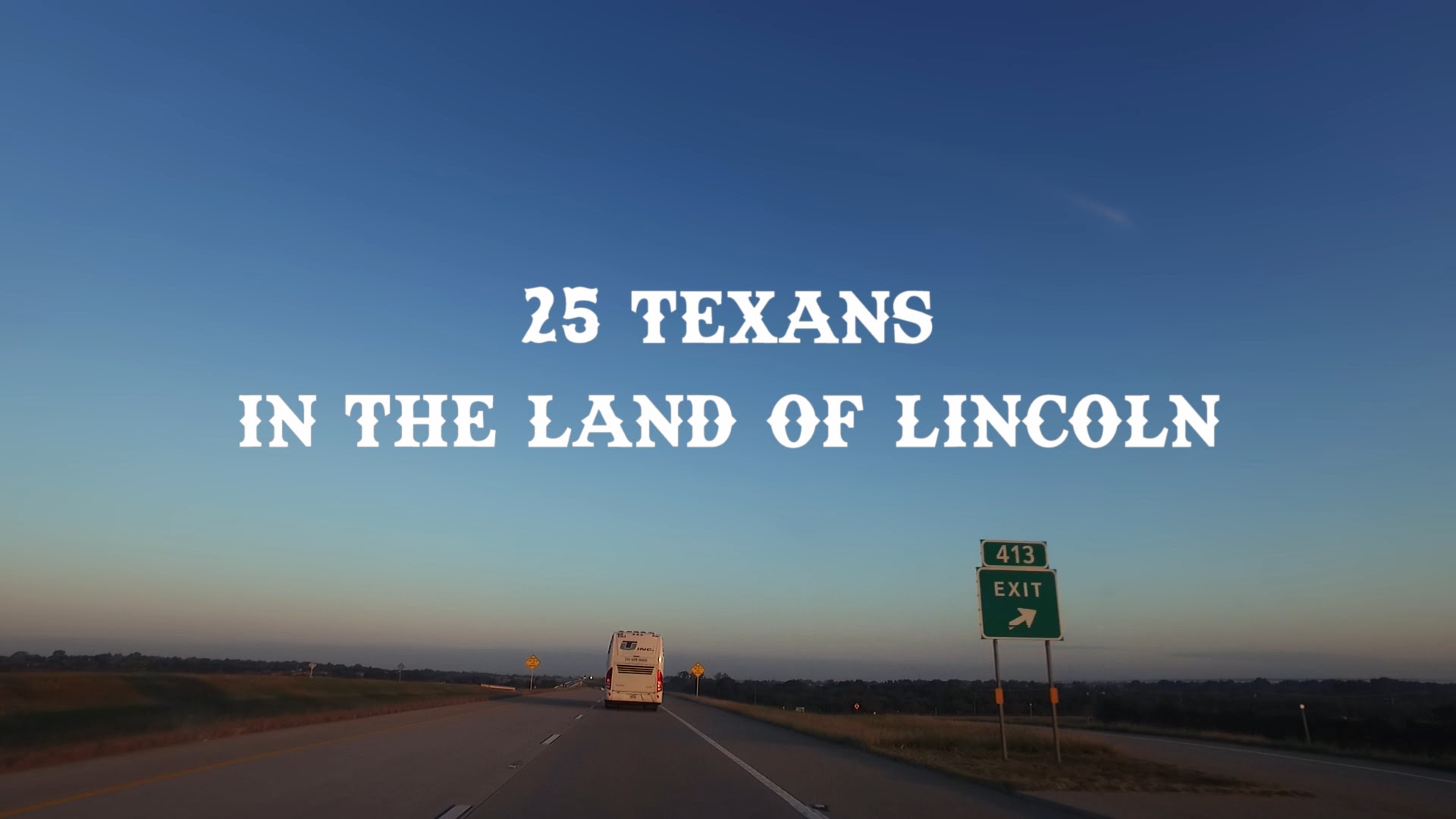 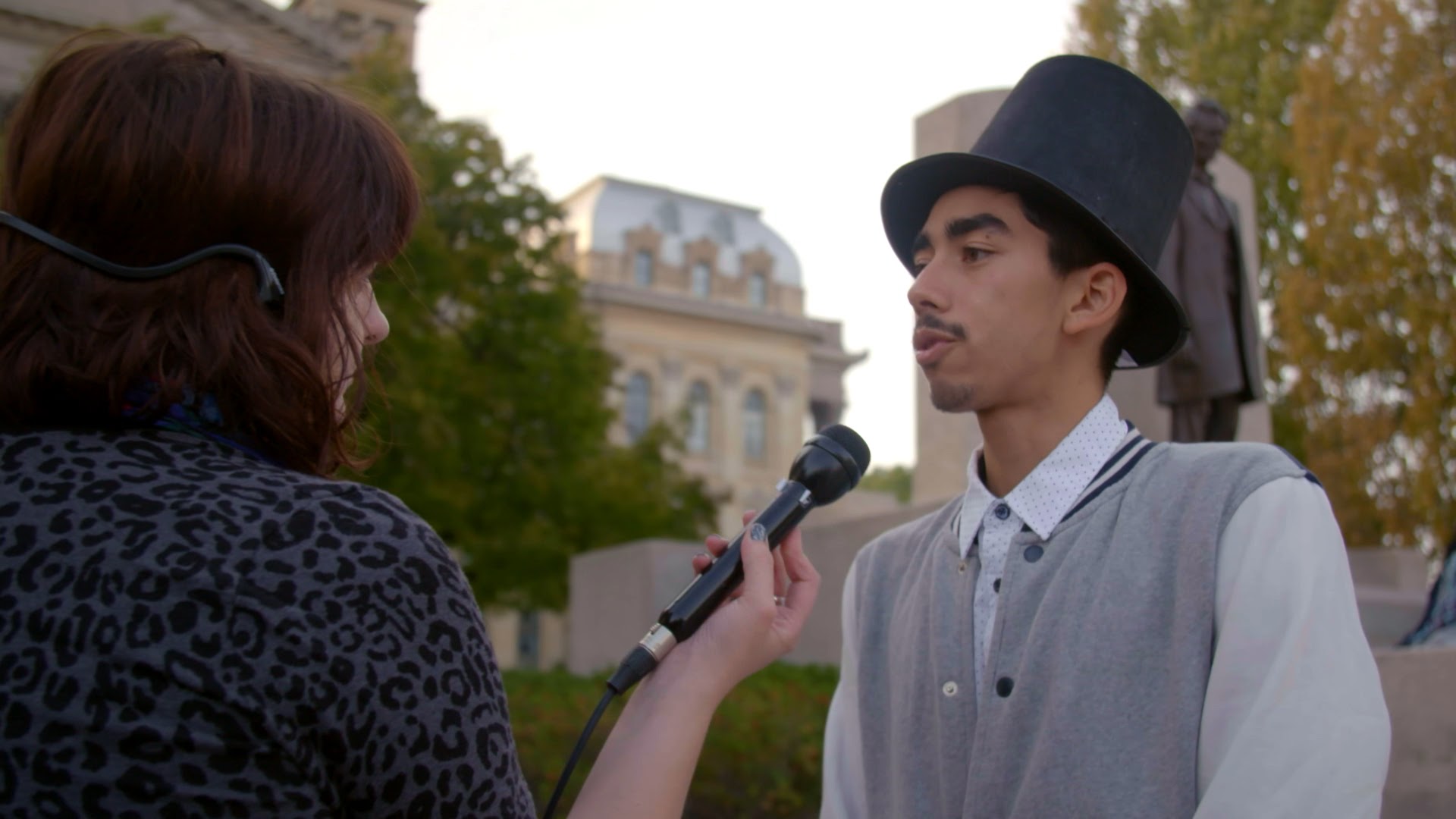 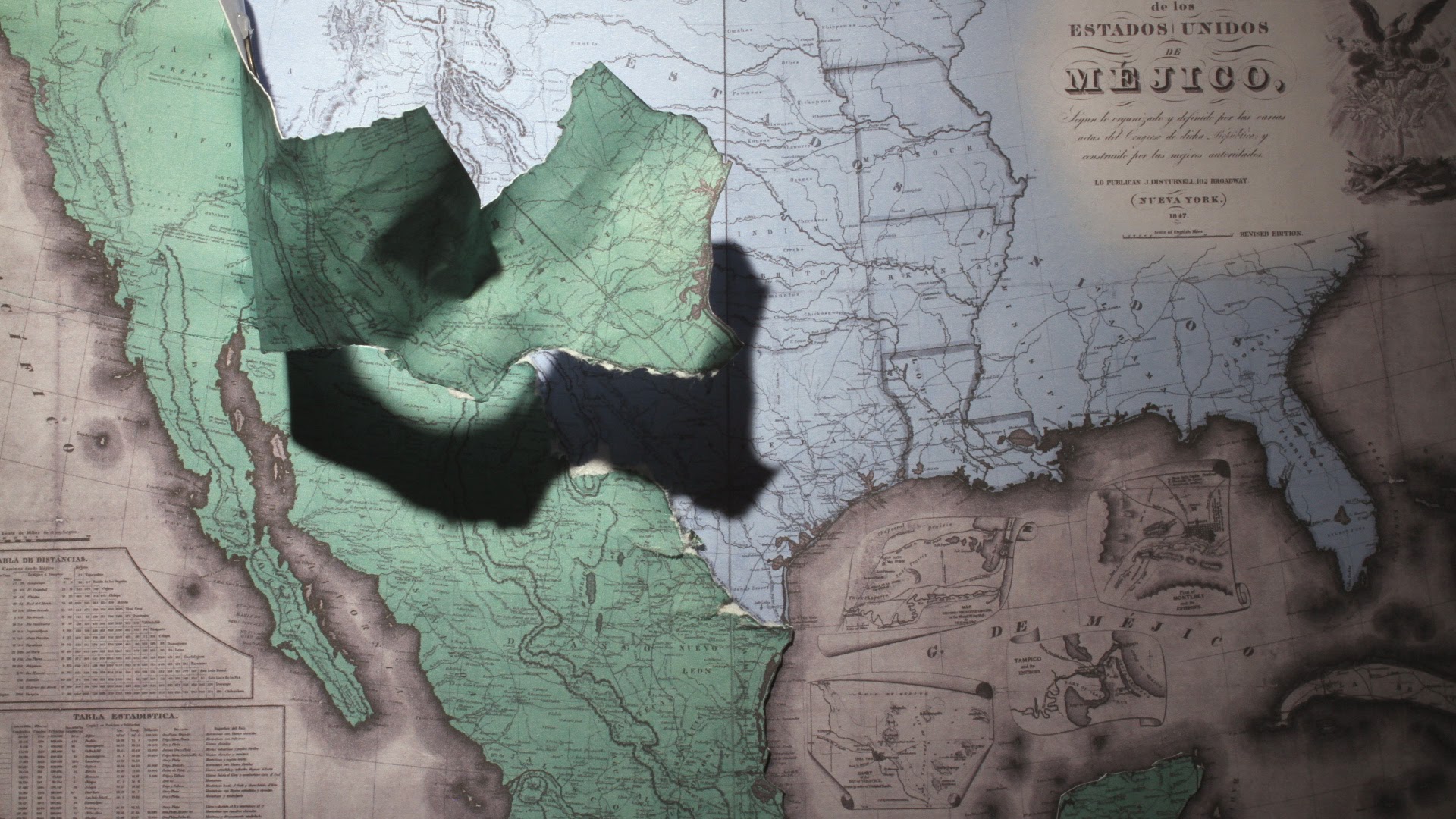 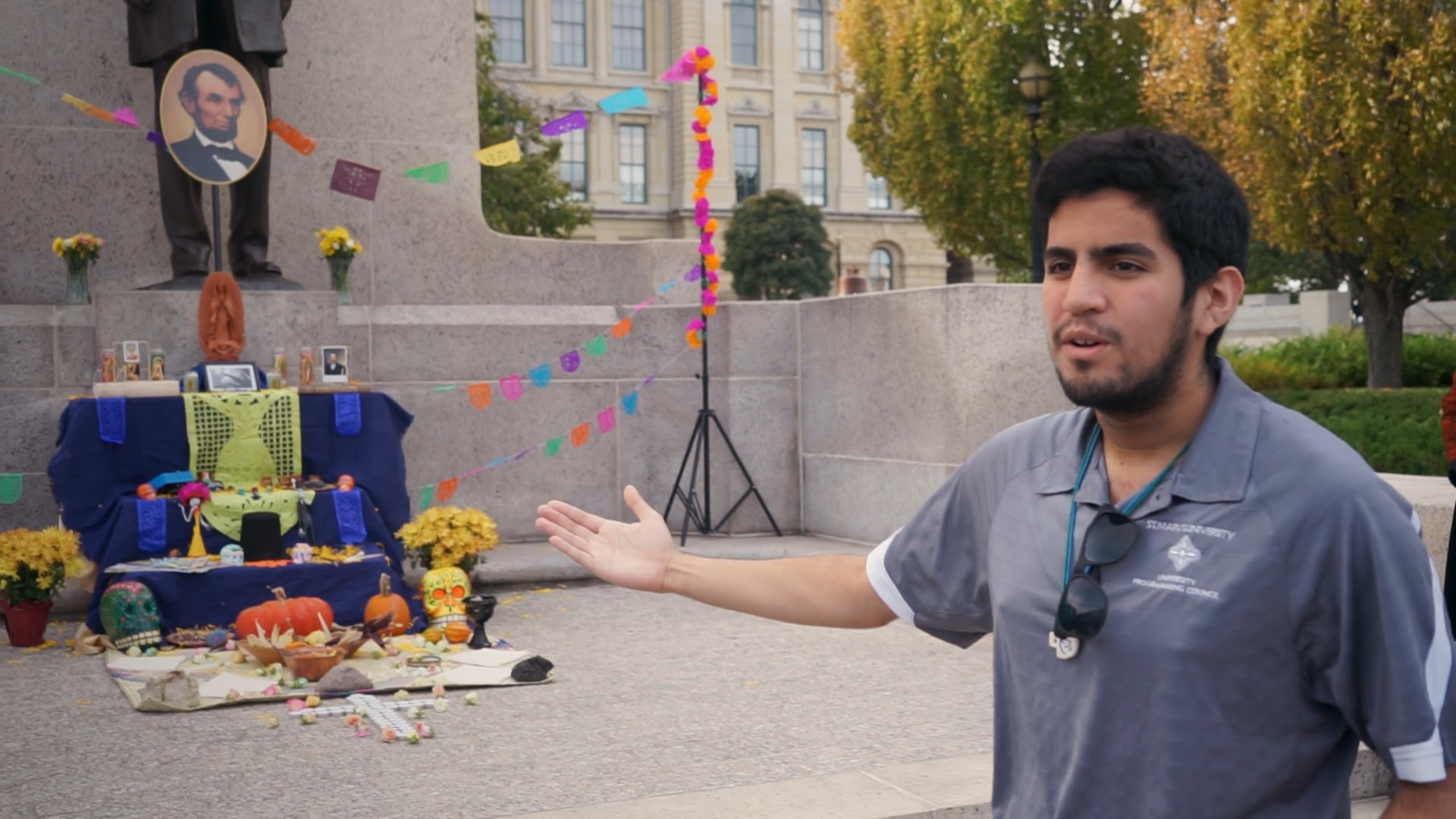 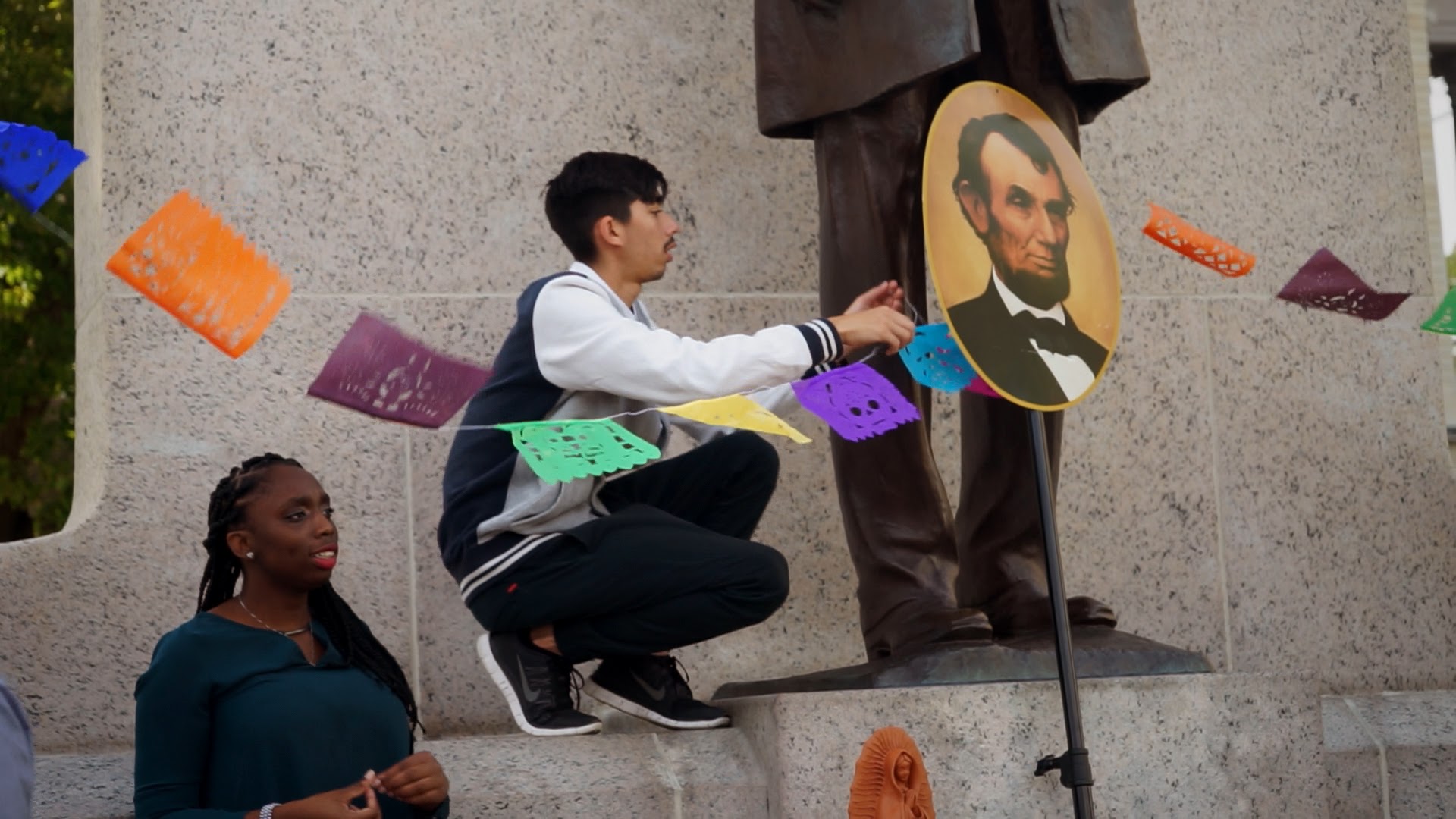 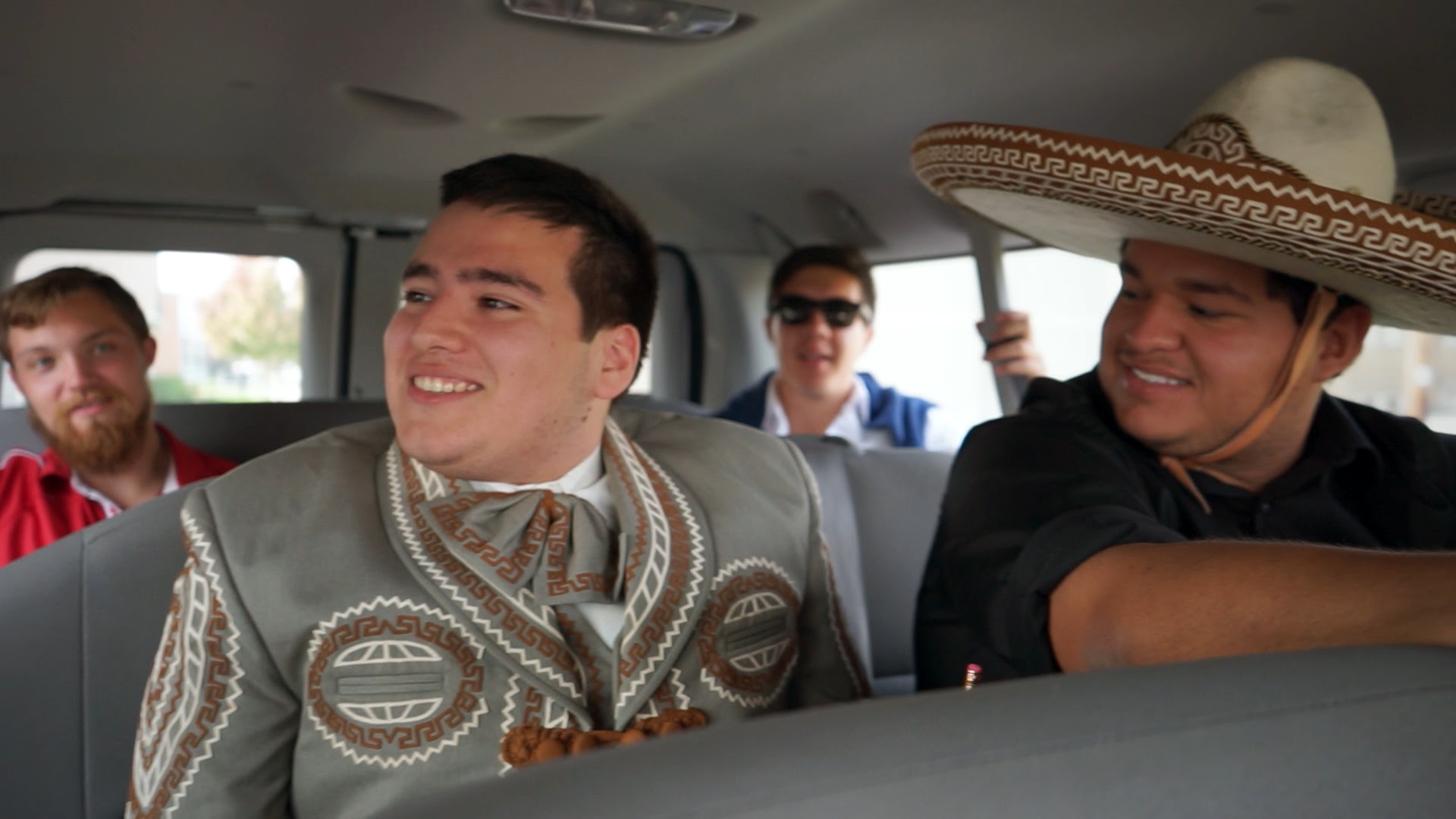 Join the quest of 25 history students, mostly Mexican American, who drive 2,000 miles from the Alamo in Texas to a Springfield, Illinois museum asking to repatriate General Santa Anna’s prosthetic leg and honoring Lincoln with a Day of the Dead altar.

Join the quest of 25 history students, mostly Mexican American, who drive 2,000 miles from the Alamo in Texas to a Springfield, Illinois museum asking to repatriate General Santa Anna’s prosthetic leg and honoring Lincoln with a Day of the Dead altar. With humor, humility, and animated history lessons, these students raise questions of identity, borders, museum ethics, and collective memory.

“A beautiful, stirring, and redemptive story about learning and especially about teaching. A history lesson, and more.”

-Jill Lepore, Harvard University, author of “These Truths: A History of the United States”

Join the quest of 25 history students, mostly Mexican American, who drive 2,000 miles from the Alamo in Texas to a Springfield, Illinois museum asking to repatriate General Santa Anna’s prosthetic leg and honoring Abe Lincoln’s support of Mexico with a Day of the Dead altar. With humor, humility, and animated history lessons, these students from San Antonio’s St. Mary’s University raise questions of identity, borders, museum ethics, and collective memory.

You will even learn a bit about the war Mexicans never forget and Americans hardly remember: the US-Mexican War, when Mexico lost half its territory and the U.S. gained what would become the states of Arizona, California, Nevada, New Mexico, Utah, and parts of Colorado and Wyoming. Known in the U.S. as the Mexican American War, Mexico still calls it the War of the United States against Mexico.

The quest aims for new understanding and a return to Mexico of the prosthetic leg captured from 11-time Mexican president, General Antonio López de Santa Anna. The students discuss the leg with curators at the Illinois State Military Museum. The quest even becomes a front page story in the Wall Street Journal the day before the 2016 Presidential Election and shows up on local TV and radio in Texas and Illinois.  At a moment of antagonism against Mexico and Mexican Americans, these students remind us to examine the story we tell ourselves about our shared history across the border.

Available for educational distribution at https://www.newday.com/

Ellen Brodsky began filmmaking after a twelve-year career in education and public health. Ellen directed “The Year We Thought About Love” (2015), a film about a LGBTQ youth theater troupe, which played over 50 film festivals, and  is available to the educational market with New Day Films, a cooperative distribution company. She  co-produced “At Home in Utopia,” following Jewish radicals in their cooperative Bronx apartments from the 1920s to the 1950s.  The film was broadcast on Independent Lens in 2009 and is also available with New Day Films.  She has directed three award- winning shorts: “What do you know? Six to twelve year olds talk about gays and lesbians,”  “Only One Boss,” and “Dental Farmer” (with co-director, Dunya Alwan), which have played festivals in all seven continents. Brodsky has a Masters in Management from the Heller School, Brandeis University and a BA in Religion from Haverford College.

Peter Rhodes is a veteran editor who was trained at the BBC in London.  He works in a broad variety of styles, ranging from cinema verité to historic re-creations to children’s films and museum installations. Since moving to the United States in 1986 he has accumulated more than 50 credits for films that have appeared on PBS, the BBC and at major film festivals. His most recent work includes Poetry In America for WGBH and Edgar Allan Poe: Buried Alive, which aired on American Masters PBS; The Year We Thought About Love, which won awards at several US festivals; Latino Americans for PBS, which won a Peabody Award in 2012;  The Last Mountain, which was an Official Selection at Sundance 2011 and winner of the IDA Pare Lorentz award; The Price of Sugar, which won the Audience Award at South by Southwest Film Festival and was shortlisted for an Academy Award; and Harvest of Fear, a Frontline/NOVA co-production which won a duPont-Columbia award.  Whilst at the BBC in 1984 he was nominated for a British Academy award for best sound-editing.

GRAMMY WINNER, EMMY Winner and EMMY Nominated Film Composer and guitarist Claudio Ragazzi has been writing award winning music for film and television, scoring dozens of projects, and performing with some of today’s most respected musicians at renowned concert halls in the world. Among some selected works Claudio has scored “The Year We Thought About Love,” the MIRAMAX Film “Next Stop Wonderland”; award winning Goldheart Productions “The Blue Diner”; John Sayles’ film “Casa de los Babys” in collaboration with Mason Daring, and Francis Ford Coppola’s “Tetro” in collaboration with Osvaldo Golijov. Claudio’s music can be heard in “Something’s Gotta Give” starring Jack Nicholson, Diane Keaton and Keanu Reeves. Claudio has scored dozens of award winning Feature Documentaries as well as TV productions for the Discovery Channel, Animal Planet, National Geographic, Telemundo, Univision and PBS, including American Experience, NOVA, Sesame Street, Arthur, and Postcards from Buster. A native of Argentina, Claudio grew up in Buenos Aires, where he started playing music at a very early age performing with some of Argentina’s most influential musicians. He currently scores films, performs and teaches Film Composition at prestigious Berklee College of Music.

Austin de Besche has been a cinematographer for over forty years, a director for half that time.  He has photographed feature films (Return of the Secaucus Seven and Lianna for John Sayles), documentaries (including Emmy winners Voices of the Children and On Thin Ice), national children’s programming (Postcards from Buster, Design Squad and NOVA scienceNOW for PBS), second unit television work (Cheers and St. Elsewhere), concert films, magazine shows, corporate films and television commercials numbered in the thousands.  His most recent work as a DP includes The Year We Thought About Love, a feature-length documentary directed by Ellen Brodsky about a theater troupe for LGBTQ youth, and the HBO film Marathon: The Patriots Day Bombing. Mr. de Besche has also produced, directed, and photographed Pilgrimage into the Past, a documentary about a Holocaust survivor.

Juliette Sutherland is a freelance cinematographer and editor working on documentary films, promotional, and corporate videos. She’s travelled the world working on various documentary projects including a short documentary about ethical chocolate in Nicaragua, which won best documentary at the Women in Film and Television International Shorts Showcase, a feature about ex-pats living in Belize, as well as various narrative shorts while living in Paris, France. She studied Documentary Film and Anthropology at Marlboro College in Vermont where her thesis project was an experimental documentary exploring western perceptions of nature and international conservation work. She spent five weeks participating and observing a volunteer-led conservation project in the rainforests of Malaysian Borneo

Daniel Rowe is a Boston-based animator, working in both traditional and digital techniques.  He received his MFA from VCU’s Kinetic Imaging Department in 2013, and his BFA in Animation from MassArt in 2007.  He is currently an Assistant Professor of Animation at Massachusetts College of Art and Design. Daniel is a recipient of the 2015 Massachusetts Cultural Council Artist Fellowship for Film & Video.

Maya Erdelyi is a Boston Based award-winning animator/designer and director, whose work has shown in festivals, galleries, and museums internationally.  She is a recipient of the 2017 Brother Thomas Fellowship Award and the 2017 Massachusetts Cultural Council Fellowship in Film.  Her animation and graphic design work can be seen in the PBS documentary “Black Memorabilia.” She is a 2012 MFA Graduate in Experimental Animation from CalArts and is represented as a director through6pointMedia, a Hollywood animation studio. Maya is currently a Faculty member in Animation at the School of the Museum of Fine Arts at Tufts University and the Lesley College of Art + Design in Boston.

Brian Amador is a Latin musician/composer and Spanish/English bilingual voice actor. His voice has been featured in narrations for Frontline, ACLU, NASA, CDC, Veterans’ Administration, Scholastic, and Expedia Travel. His compositions have been featured on all the recordings of the award-winning Latin Band Sol y Canto as well as many children’s audiobooks that he narrated along with his family. Originally from Albuquerque, New Mexico, one of Brian’s skills is the ability to modulate his accent from neutral North American to a thick Hispanic accent on demand.

The St. Mary’s Master of Public History specializes in training “new generations of historians in the presentation of inclusive, ethical and responsible representations of the past.” It is a 30-credit-hour program tailored towards those interested in “museum studies, heritage tourism, documentary filmmaking, digital history and archives.” It also has partnerships with “local, state and national institutions including the Alamo, the Institute of Texan Cultures, the Tobin Center for the Performing Arts, Fort Sam Houston, the Archdiocese of San Antonio, museums in the Rio Grande Valley, the Texas World War I Centennial Committee, Ford’s Theatre and the United States Holocaut Memorial Museum in Washington D.C., museums in Chicago and in Springfield, Illinois, among others.” https://www.stmarytx.edu/academics/programs/master-public-history/